Uneasy Photography: The Politics of Images in a Time of Crisis 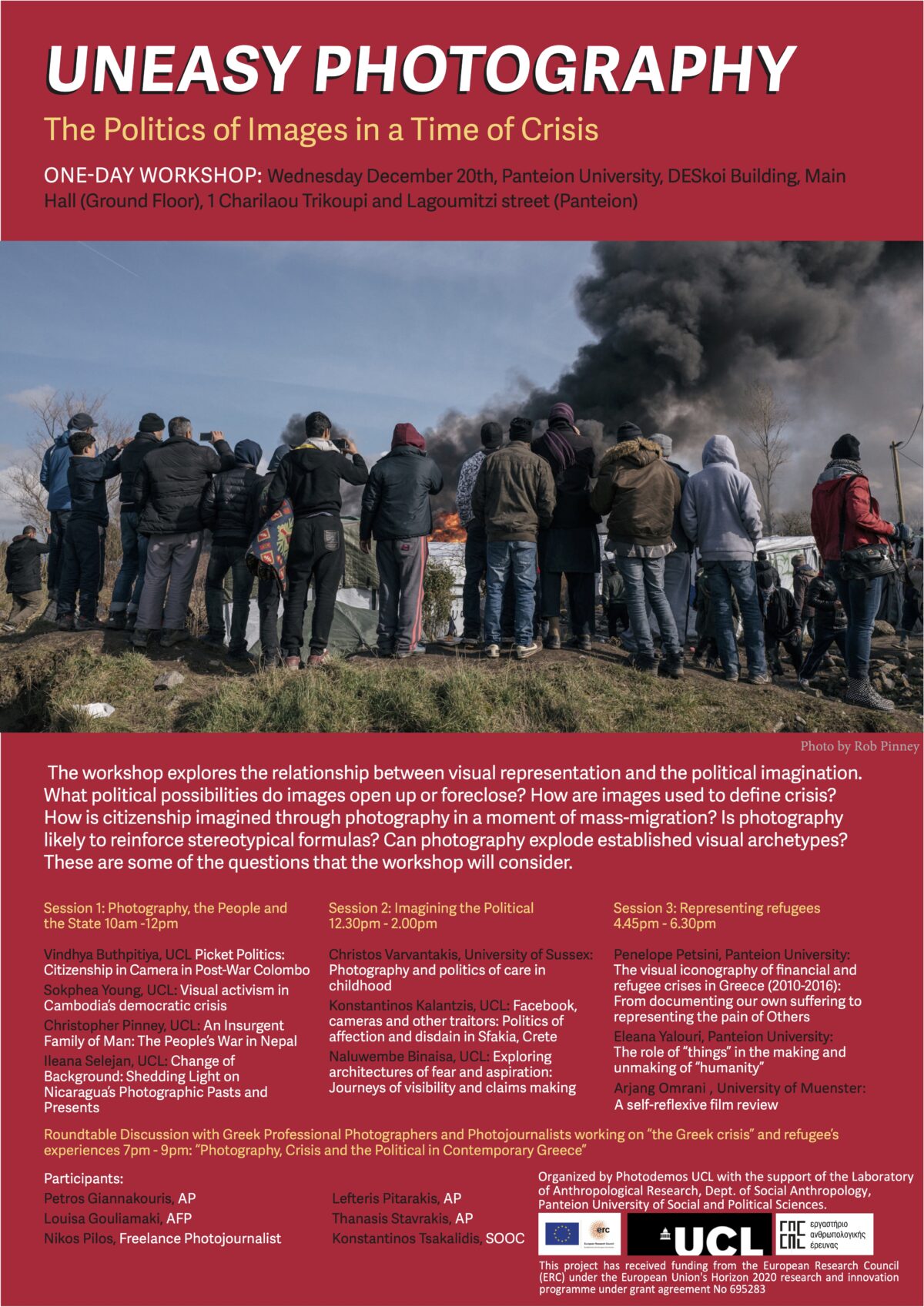 The workshop explored the relationship between visual representation and the political imagination. What political possibilities do images open up or foreclose? How are images used to define crisis? How is citizenship imagined through photography in a moment of mass-migration? Is photography likely to reinforce stereotypical formulas? Can photography explode established visual archetypes? These are some of the questions that the workshop considered.

Session 1: Photography, the people and the state

In post-war Sri Lanka, protests have become a staple articulation of both opposition and support. Protests in Colombo are frequent and numerous. A medley of seemingly unrelated pickets unites in a campaign of objection against a private medical college. Family members of those who disappeared during the civil war and its aftermath have marked nearly 300 days of protest against the continued inaction by the Sri Lankan government. Buddhist monks protest violently at a safehouse where Rohingya refugees from Myanmar are housed. While the effectiveness of these protests might be questioned, they persist. Photographs of these protests have also begun to visually define Sri Lanka, as it grapples with a “peace” that was won. Where issues pertaining to reconciliation and transitional justice remain unresolved, protests that revolve around these themes offer compelling perspectives on the politics and performance of citizenship in post-war Sri Lanka. Drawing on the ethnographic encounter of a protest demanding the release of two Tamil political prisoners, this paper seeks to explore the solidarities and tensions of activism as it takes place in camera.

The contemporary landscape of Cambodia’s photography has transformed from collective memories to questioning socio-political matters. This paper examines the political meanings of photographs and visual images within Cambodia’s current political turbulence. Given the country’s low rate of literacy, visual means have played crucial roles in defining citizenship and the country’s everyday socio-political concerns. Drawing on ongoing fieldwork, the photographic practices of both professional and amateur photographers are shown to be different even though they share the same objectives. Both amateurs and photojournalists, for instance, tend to employ a straightforward approach (re-producing, sharing and displaying photos, through online and offline means, that expose the malpractice and the failure of the regime). Other photographers deploy more abstract tactics, using artistic materials to mainstream and enrich citizens’ critical thinking. Not only do these exemplify political contestation within Cambodia where rulers have clung onto power at the expense of freedom of speech and transparency, they also elucidate the political meanings of “visual citizenship”.

Christopher Pinney, UCL: An Insurgent Family of Man: The People’s War in Nepal

Three major photographic engagements with Nepali politics are considered: Gopal Chitrakar’s documentation of the 1990s Democracy Movement, Kunda Dixit’s travelling exhibition of images of the 1996-2006 insurgency, and a Maoist critique of this. All three projects invoked “people” in strikingly different ways being titled respectively People Power, A People War, and The People’s War in Pictures. Drawing on interviews with the key figures behind these representations, the visual construction, and political potential, of different kinds of multitudes and publics is explored.

Nicaragua’s current visual landscape is governed by images of the presidential couple, and ever-rising tides of… commercial advertisements. Visual tactics for engaging citizens in public space became widely used during the 1980s, as the Sandinista government sought to disseminate political imagery via posters, billboards, and murals, as part of campaigns for social justice and revolutionary change. Nicaraguans have been accustomed to sharing space with aspirational images of what life should or could be collectively, as well as privately—their desires expressed in everyday photographic practices, especially portraiture. Photographic images, whether reproduced exactly or transformed, have been integral to citizens’ sensorium long-term, their presence exacerbated by the digital turn. How was this transition negotiated? Which are the continuities and discontinuities? This paper will investigate the mobility of images across the public and private realms, and discuss parallel developments in how power shifts have been interpreted from above and from below.

Christos Varvantakis, University of Sussex: Photography and politics of care in childhood

The Connectors Study, an ERC funded longitudinal multi-sited ethnographic study has set to enquire into the relationships between childhood and public life, with children in middle childhood in three cities (Athens, Hyderabad and London). The political aspects of childhood are usually glossed-over by mainstream social and political science, and we consider that the theoretical costs for ignoring childhood to be high. One reason for this omission is the methodological difficulty to access to childrens’ views and opinions, particularly as the political might be embodied, subtle, delicate, located in the everyday life and thus often pretty “invisible – at least to the status quo research methodologies. In the course of our research we have reflexively experimented with the employment and remixing of methodologies, with different visual and ethnographic methods, to allow for a multimodal, processual and reflective enquiry into children’s relationships of concern and politics of care. In this presentation, I will discuss the use of photography around one case study from Exarcheia, Athens, in order to illustrate how photography in research with children – employed reflectively, as a socially grounded process, with a longitudinal scope and with respect to the different kinds of information that the medium conveys, may be a collaboratively used methodological tool to discuss and project desires and critique regarding children’s relationship to life beyond their domestic and private spheres.

Konstantinos Kalantzis, UCL: Facebook, cameras and other traitors: Politics of affection and disdain in Sfakia, Crete

What could the connection between Facebook and Greeks collaborating in the 1940s with German Nazis be? How can social engagements around visual images found on rural household walls and social media platforms enable theorizations of political imagination in contemporary Greece? This paper explores these questions by drawing on ethnography in the Sfakia region of Crete, an area at the intersection of cultural investments by its thousands of annual tourists and Greek nationals as a place of rugged geography and resistance to invaders. The paper looks at the experiences and conversations taking place inside and around photographs as well as other material traces created and disseminated by locals, tourists and me.

“Architecture of fear” (Azoulay) calls our attention to the visual manifestation within landscapes and seascapes of politics that concretise narratives of states’ legitimacy. The current “migration crisis” within Africa and Europe offers a point of focus to explore competing contradictory narratives of fear and aspiration that manifest at the state and personal level. This paper draws on fieldwork in Nigeria and the photographs that appear in print and social media on different platforms. I explore the alternative “truths” and debates they stimulate through appropriation, dissemination and silencing, to reappraise their continuing role in making and marking boundaries of belonging where gender is an important dimension. The discussion seeks to understand the liveliness of the ‘image event’ as a core infrastructure that works alone and with other infrastructures to fuel fear, hope, oppression and simultaneously reveal the instability within borders; as those who were the previously alien, tolerated, polluting black brown bodies “cross over” and back again claiming place and visibility.

Penelope Petsini, Panteion University: The visual iconography of financial and refugee crises in Greece (2010-2016): From documenting our own suffering to representing the pain of Others

This paper examines how the experience of crisis in Greece has been turned into images and the contexts in which they circulated during two crucial periods over the current decade: the country’s financial crisis and the refugee crisis which followed. During this period, Greek photojournalism –having the relative advantage of familiarity with place and events– has vigorously claimed a place both in the international Press and in the world of art, creating a vast amount of images of an international interest. Arguably, photographic evidence is central to our view of what constitutes ‘crisis’. Yet, far from simply providing documentary evidence, images reflect social, political and cultural attitudes specific to the time of their production and proliferation. The paper aims to discuss some key themes pertaining to the representation of the recent crises: the political economy of media production within which photojournalism operates; the visual vocabulary of humanitarian photography adopted in most cases and the intensely emotional nature of photographs of humanitarian crises; the aspects of lived experience which were repeatedly highlighted to the exclusion of others; the ethical imperatives deriving from these representations; and, ultimately, how images shape our understanding and responses to humanitarian crises.

Eleana Yalouri, Panteion University: The role of “things” in the making and unmaking of “humanity”

This paper discusses the ways in which specific “things”, such as the life vest, the foil blanket, or the refugee boat operate in representing the refugee crisis. Drawing on a number of visual art projects which use these and other things as visual means of approaching their subject matter, I examine the extent to which contemporary artworks can act subversively in the context of a collective reflection on the refugee crisis, its representations and the ways it is connected to “the human” and “humanitarianism”, as well as a means of criticizing clichés and stereotypical depictions of it. Such uses of “things” to talk about or to comment on “the human”, “humanity” and “humanitarian activities” may give interesting insights and also contribute to recent discussions taking place in the field of material culture studies and are concerned about the relationship between people and things and the ways the latter interfere in socio-cultural processes.

In 2013 I was invited to join a project that aimed to organize film workshops for unaccompanied minor refugees in order to produce a film shot by them about their journeys. Being highly critical of the idea, as the director of the film, I transform the project into a film that none of the original participants appeared in. In 2016-17 in contrast to the previous project, with the collaboration of a young refugee in Greece we made a film that was shot by him with his own mobile phone. This paper, through a self-reflexive approach, compares these two experiences in an attempt to address the dilemmas regarding the critical aspects of image making regarding the people who become the subjects of research as well as consuming the images that are produced by them. By doing so I also would like to address the possibilities of the poetical and political strategies in film.

Session 4: Photography, crisis and the political in contemporary Greece

Photographic impressions from the workshop 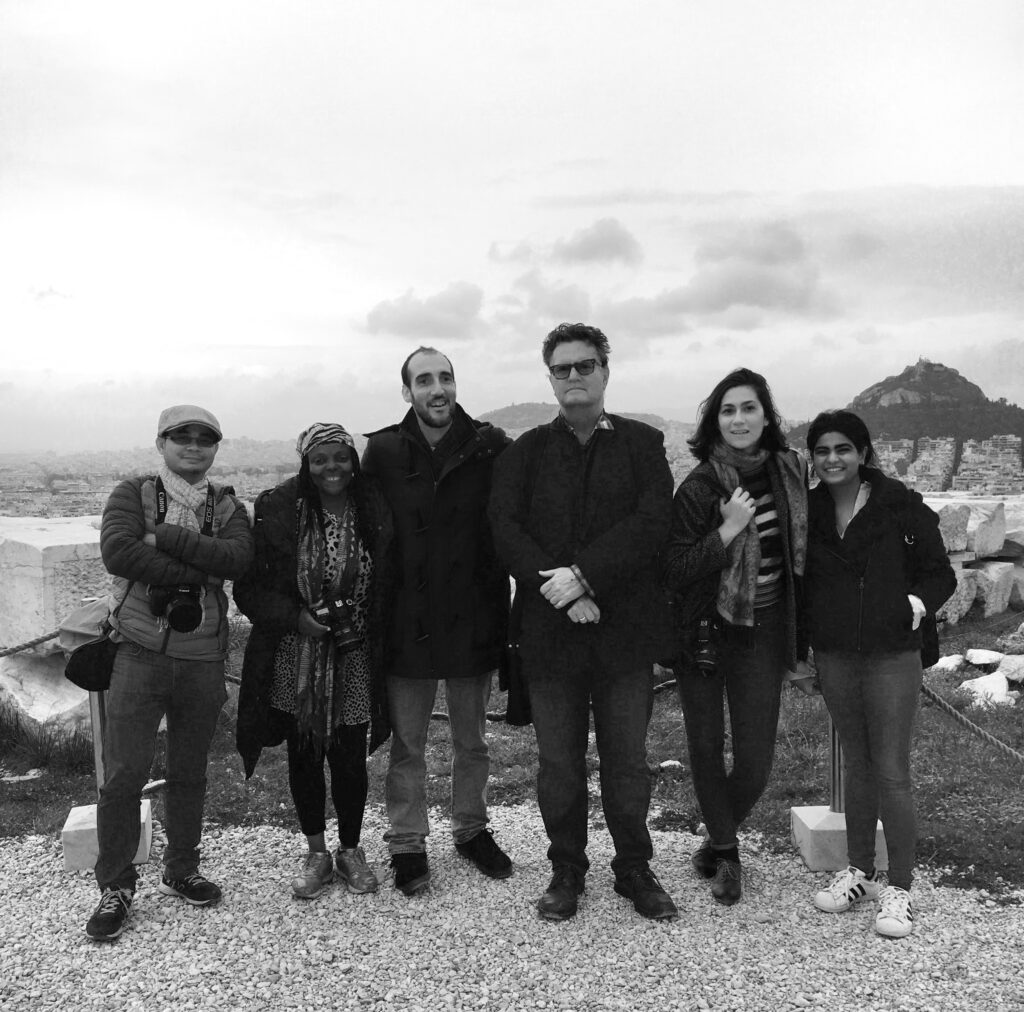 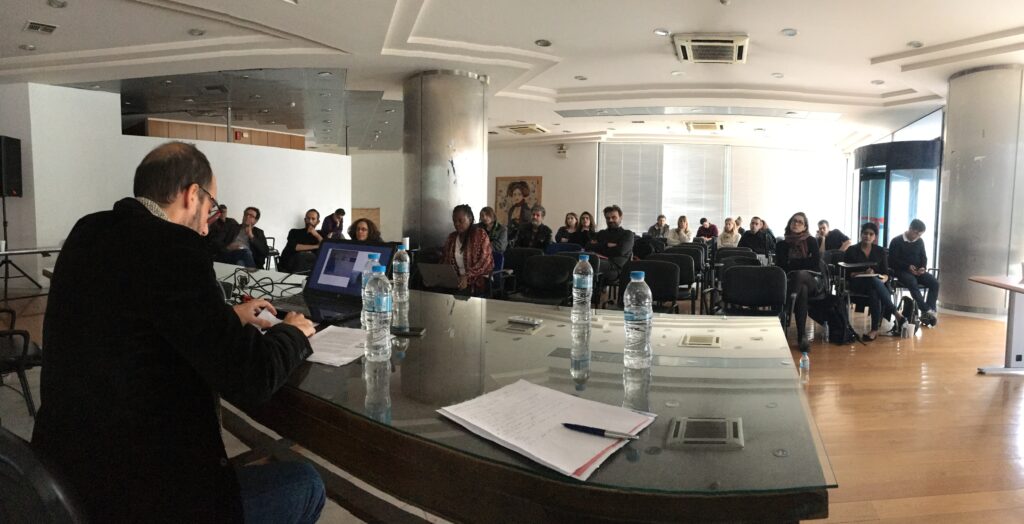 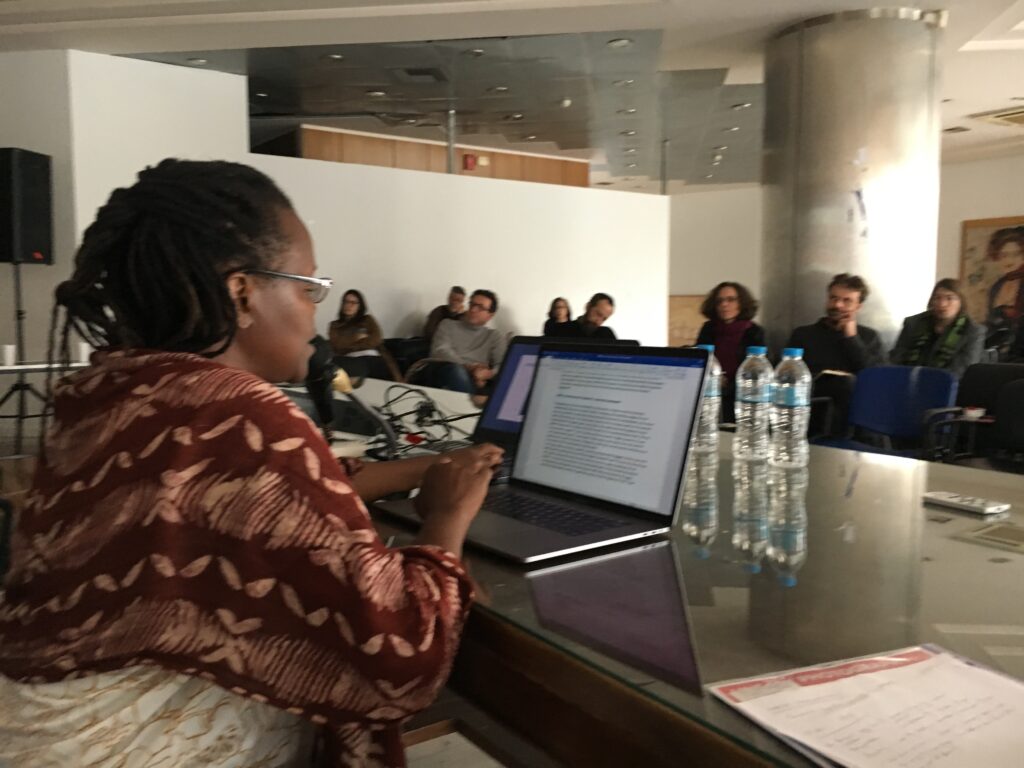 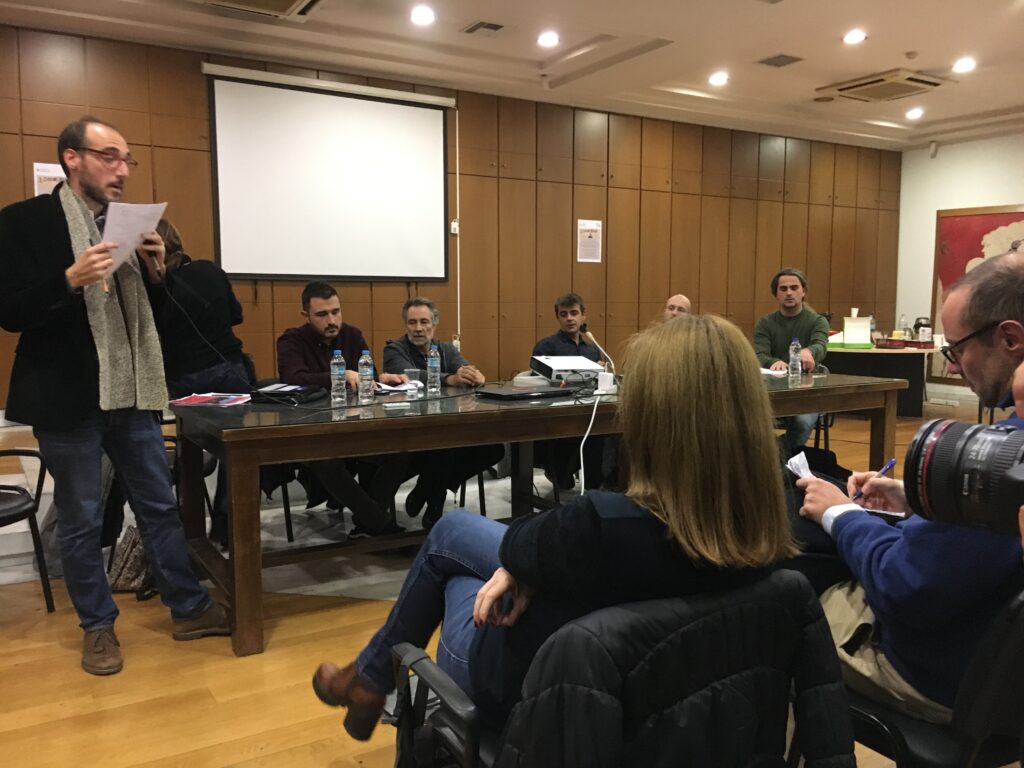 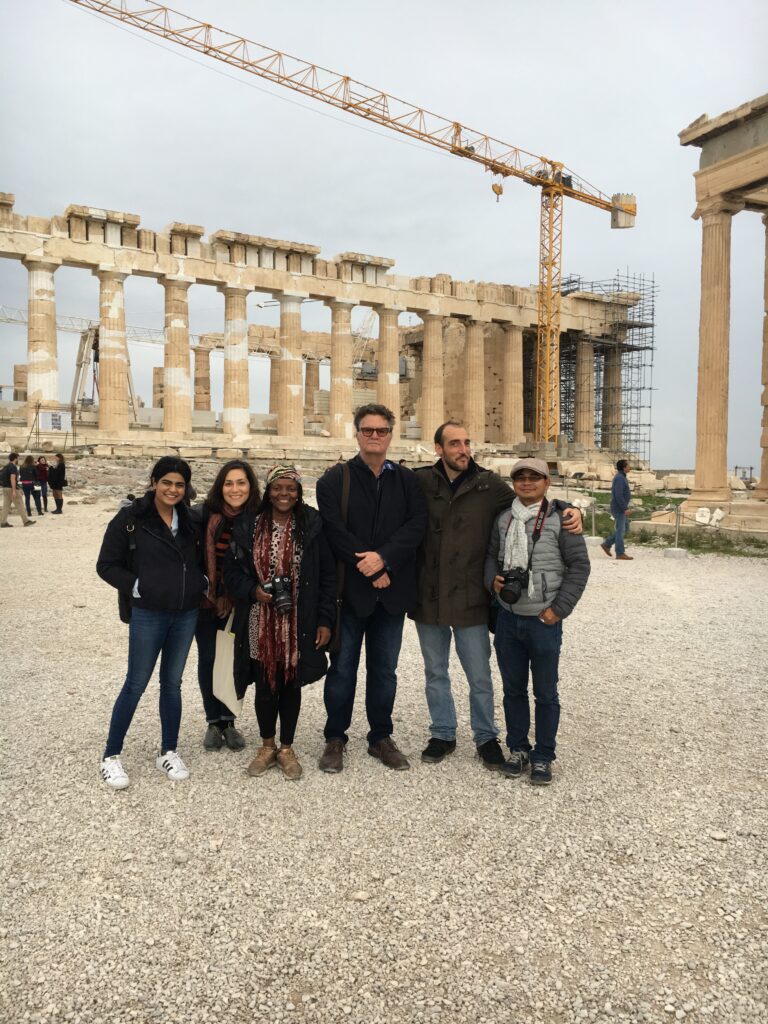 Organized by Photodemos UCL with the support of the Laboratory of Anthropological Research, Dept. of Social Anthropology, Panteion University of Social and Political Sciences.